So, if you haven’t heard yet, during his interview with Ryan Seacrest, singer Jason Derulo hinted at the fact that the “Pressure of Marriage” contributed to his split from the gorgeous former American Idol Winner, Jordan Sparks.

In his interview Derulo added that their busy schedules contributed to time apart, which added stress to their relationship. 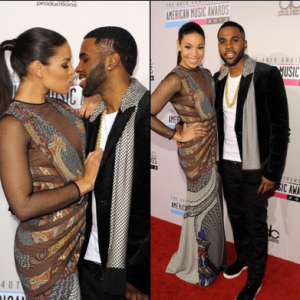 This is why compromises are made. They are made to account for the negatives and divergent ideas that arise within a relationship. However, all things cannot be compromised. They should not be. It reminds of the saying my mom always told me: “If you don’t stand for something you will fall for anything”. So some people’s views and passions will ultimately separate them. There is not getting around that.

When relationships split, it is sad. It doesn’t matter how much you understand why it has to end this way, they do, and accepting it can be hard.

So, here is my advice to Jason and Jordan. In life we meet amazing people that play a grave impact on us. Some more than others. We must take those experiences, appreciate them, and sometimes in time we must move on. The next time around you will be stronger and better than before, if you wisely take note of why it didn’t work out and apply that to making better decisions in the future you will eventually end up with what you are looking for. Hopefully, that includes a happy ending for both of you.

Who knows what really happened between Jason and Jordan right? I think we need both sides of the story.

Lets go with idea that what he implied about her pressuring him into marriage to be true. When it comes to pressuring a man for marriage, its not a good idea. If you want it to last both of you must be all in. It takes work to have a successful marriage. You have to take that very serious.

Now, if you  have decided that marriage is something you want, I do believe it is important to be mindful of the amount of time you are dating someone. If there seems to be no future commitment and that is in your life plan, I see nothing wrong with walking away from a relationship when enough time has passed. If talks of marriage have not risen at all in 2 years, by my clock its looking iffy. By year 3, some direction should have been shared. Even-though there is no magic number explaining how long is too long. If something hasn’t happened between the 3rd and 5th year, I would start asking questions. Anytime before that I think is too early to walk away. I mean give the guy some time. At-least talk about it first before you call it quits! Some women have a number in their head, and if dude misses the deadline she walks away. I am not a fan of that method! Talk to him, see if you want the same things, if not then you can confidently walk away, not fearful that you left something behind! – I know TANGENT!

I would also like to say, that generally speaking your romantic partner is suppose to be you oasis away from the stressors in your life. So, if you are causing stress in your relationship re-adjust yourself. If your partner is causing stress within the relationship be sure to have a serious conversation with them letting them know how you feel. Don’t wait until it gets worse. Address it now!

Happy Life = Let Go Of the Stressors and move on. Or in better words: Let Go and Let God!

I Hope That Helps!